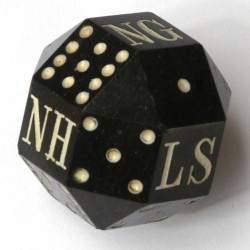 This is an antique stone gaming die. Its shape is a Rhombicuboctahedron, so it has 18 square faces and 8 triangular faces. The triangular faces are blank, 12 faces have the numbers 1 to 12, and 6 face have various pairs of letters.

It is made of serpentine stone, or serpentinite. It is black, though serpentine generally has some green patterning in it, similar to the colour of the cardboard box it is stored in.

Here is the layout:

This die was made in Zöblitz, a small town in the Erz Mountains of Germany, about 8 km from the border of Czechia. Serpentine has been mined and carved there since at least the mid-16th century. It was probably made between 1880 and 1910. On some of these dice the pips and letters are very clearly hand-carved, but on this one the letters are quite neatly made so they could well have been made with the assistance of a pantograph. It is quite likely that these relatively low value objects were made by apprentices.

The game played with the six letter combinations is an old game that is now known as a Put and Take game, or Nimmgib in German. It goes back several centuries, but the exact age is disputed. There is a brass 14-sided die (a cuboctahedron) with German Put and Take options on the sides which is claimed to be from the late 15th century. There is a 17th century silver 6-sided Put and Take die. It was also often played using a teetotum - a square, hexagonal or octagonal spinning top with letters or words on the sides, similar to a dreidel. Totums were tops with numbered sides used as far back as ancient Greece as an alternative to dice. When letters were put on the sides to use them in Put and Take games they were called T-totums. This happened in the early 18th century.

There are many minor variations, for example with options to put or take double or triple your stake. In the German versions, NG is sometimes replaced by NA (Nimm Alles), and TA is sometimes TH (Tritt her). The TA option is also interpreted as Trink Aus, so the player has to down their drink.

In the middle of 1921 the game became extremely popular in the United States, possibly helped by the effects of prohibition setting in. Various types of Put and Take games had been played for years, mostly with dice and sometimes cards, but suddenly the simple game with the spinning top was everywhere, and played in all layers of society. It is possible that the tops were brought to America from Germany by soldiers returning from the first world war, and that it took a few years for English versions to be made widely available. The craze lasted for about a year, and after a few more years the game had almost disappeared again.

Here are some ads and articles mostly about the Put and Take craze of 1921.

Back to Home Page